Had a summer cold (this time, not COVID) so I logged off work early. Decided it was time to finally watch The Net, for irony value. 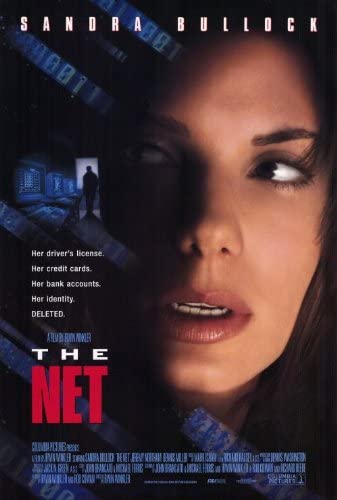 I’m not a huge Sandra Bullock fan, which is probably unfair because the only other two movies I’ve seen her in, Speed and Gravity, were really good. The Net was about what I expected. For a thriller, the action sequences, which involved a lot of aimless running (really, jogging) were not exactly fast-paced. I spent most of the first half hour trying to think of a good drinking game, the drink in this case being blue Powerade.

And then I hit upon it. The movie was made in 1995, but fashion, architecture and industrial design have changed so little since then that most of the scenes are indistinguishable from the present day. Newport cigarettes packaging remains the same. Even high-waisted jeans have made a comeback!

These were the only details I could find in 114 long minutes that looked out of place:

Granted I was mildly feverish, but there should have been more. It’s been almost 30 years.

Did the Internet stop time?