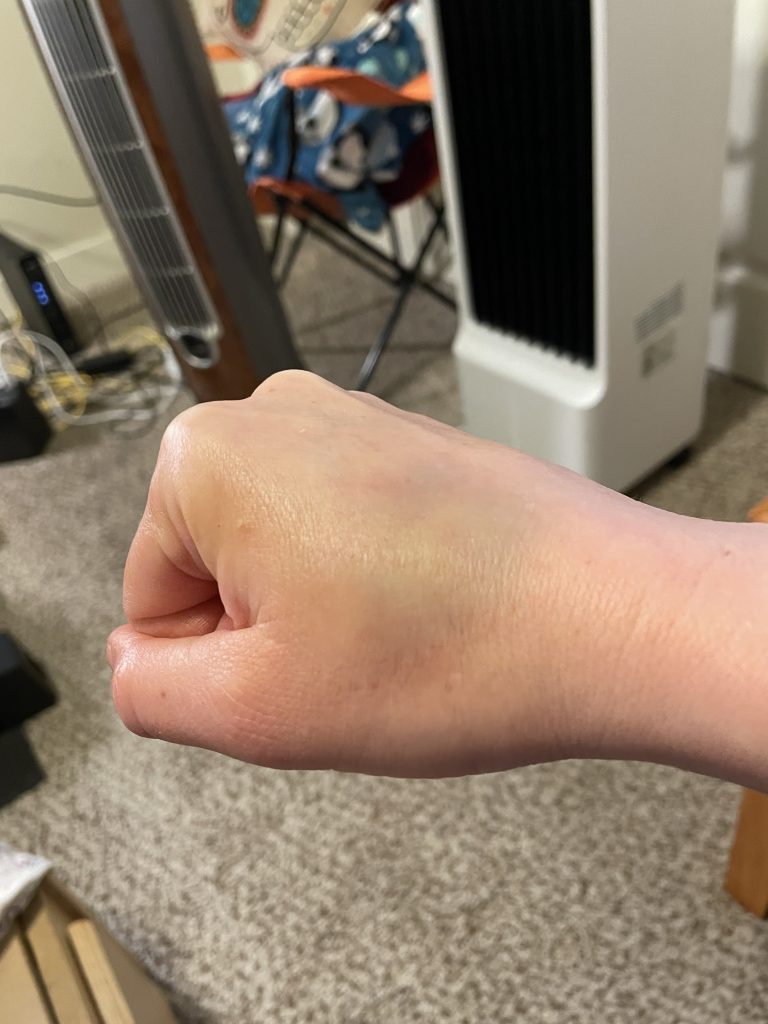 Bruising from anemia due to fibroids. It appeared out of nowhere this afternoon. I didn’t bump or hit my hand.

I wrote an article last week about living with fibroids. Please read it if you get a chance. It amazes me that 26 million women live with this serious illness, yet many people don’t know what they are. My best friend, whom I’ve known for 11 years, had never heard of them.

Bleeding is getting worse every day. It’s worse than it was when I first wrote the article. Based on the supplies I’m consuming, I’m losing somewhere in the neighborhood of 75 ml of blood lost per day. For perspective, typical blood lost during a menstrual cycle is 60 ml per week. This means I am losing blood at 5-7X the normal rate. And I am losing this much every week.

This alone won’t kill me. Human body has to lose 2.5 liters of blood to die directly from blood loss (anemia could theoretically produce heart failure at an earlier stage, but we won’t worry about that). If I keep drinking fluids, resting, and taking iron supplements I’ll be able to last until surgery. Whether it’s in 2 weeks or in 6 months. I’ll even be able to keep working at my current job.

What concerns me is that the rate of blood loss has accelerated dramatically. I have experienced  bleeding since Friday, April 22 of this year, on all but approximately 3 days. This past week has been by far the heaviest since Saturday, April 23 — the day after this “never-ending period” began.

So I ask myself, “what if it gets worse?”

Could I actually hemorrhage?

That can happen with miscarriages. How different is my condition?

What if I lose consciousness and never wake up? Could that happen?

Seems unlikely but not impossible. I’m still waiting for a referral to see a specialist. Realistically, I am ready for surgery — more ready than I was two weeks ago — but it will be several months at least before my life goes back to normal again. Had a Zoom call with my doctor this morning and he doesn’t have any clear idea how to stop or decrease the bleeding. We are just going to keep trying things while we wait for the procedure to get scheduled.

If I die before I wake, please know that the US health care system has some problems. But I am guessing you may already know that.

What else do you need to know?

An individual by the name of Spencer Gusick wants me to keep silent. According to the federal FBI definition, he is guilty of the crime of rape.

Gusick went to high school with the current U.S. Director of National Intelligence, Avril Haines. She looks a lot like me. It is possible they knew each other. It is also possible they have kept in touch.

From here you may draw your own conclusions.